Update: Click here for my analysis of the 2012 US election results

Jan 2012: Here’s my early prediction of the outcome of this year’s US Presidential election. I think Democratic candidate Barack Obama will narrowly win a second term as President with 295 electoral college votes, just ahead of his Republican rival on 243.

I expect the Republicans will eventually nominate Mitt Romney to be their candidate. However if the dramatic result of the GOP caucuses in Iowa is anything to go by, it certainly promises to be a fascinating contest. 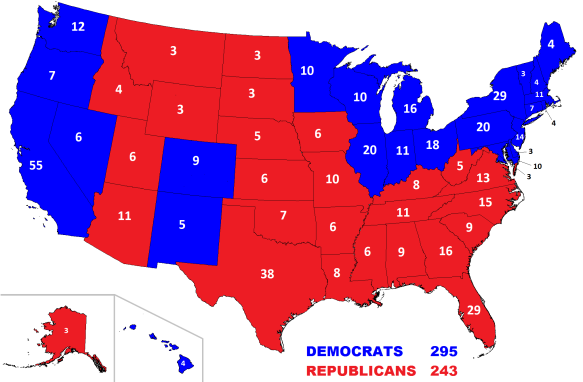 Based on everything I’ve seen and read over the last 10 months of this extraordinary election campaign I have 2 revisions to make to my forecast from January. I think INDIANA will vote for Romney instead of Obama (11 electoral college votes). However I also think that IOWA will vote for Obama instead of Romney (6 electoral college votes). Overall I predict that President Obama will be re-elected with the following result: