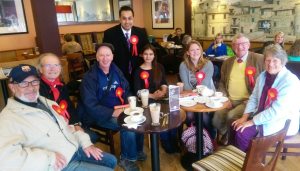 Over the last 9 months, together with my team of Labour council candidates, I have been speaking with people in Oadby, Wigston, Fleckney, Great Glen, Kibworth, North Kilworth, Market Harborough, and many other parts of our great constituency.

I have attended four separate hustings, including the Leicester Secular Society debate featured in the video above, and I have participated in several house meetings organised by local residents.

I have visited schools, sports clubs, businesses and places of worship, and I have been listening to the concerns of local residents, and the difficulties that people are being forced to endure.

Throughout the campaign I have noticed a distinct theme. Firstly many people in Harborough, Oadby and Wigston are feeling the effects of rising food and energy prices as their salaries stagnate. Moreover, hundreds of local people are experiencing problems as a direct result of the current Tory government’s failures on the NHS, jobs, housing and welfare.

To counter this cost of living crisis in our country, stimulate faster growth in the economy, and repair our public services and NHS, Labour has a detailed and costed plan with a wide range of excellent policies. (Click here to read the Labour manifesto.)

This includes raising the minimum wage to £8 per hour, banning exploitative zero hours contracts, and abolishing the bedroom tax. It also includes freezing energy prices for two years and freezing rail prices for at least one year, bringing in rent controls to make housing affordable, extending free childcare to 25 hours, and protecting state pensions whilst capping pension fees and charges.

For young people betrayed by the Liberal Democrats – who had pledged not to raise tuition fees and then trebled them – Labour will cut tuition fees by a third. We also want to lower the voting age to 16, reform the House of Lords, increase pay transparency to end the gender pay gap, and freeze business rates for SMEs.

In terms to our NHS we will guarantee GP appointments within 48 hours and have maximum wait times of 1 week for cancer tests and results. We also plan to recruit 8,000 more doctors and 20,000 more nurses, whilst integrating health and social care in order to help all people with their physical, mental and social care needs. Most importantly of all we want to reverse the part-privatisation of our NHS brought in by the Tory and Lib Dem coalition.

So to all the wonderful people of Harborough, Oadby and Wigston, and everyone else reading this blog post, I ask you to please vote Labour on Thursday 7 May 2015.

Your vote matters a great deal in this election, especially in our constituency where the Lib Dems are now trailing in 4th place, according to several respected media outlets. A vote for the Lib Dems will simply serve to let the Tories back in!

Vote for Labour’s excellent policies and the principles for which we stand. Vote for a progressive government and a leader who is prepared to stand up to powerful interests. Vote for a better future for you, for your family and for Britain.

“Thank you to everyone who voted for me in Harborough, Oadby and Wigston. Labour came second; our best result here since 1979! Thanks to my agent and campaign team. Although it was a terrible result for the Labour Party nationwide, I am confident we will regroup, learn some big lessons, and once again regain the trust of the British people.” – Sundip Meghani

“I was delighted to be selected on 4 August as Labour’s prospective parliamentary candidate for Harborough in the upcoming general election. It is a huge honour to stand as a Labour candidate and I am very grateful to party members for entrusting me to lead our local campaign.

We will be flying the flag for Labour and campaigning in Oadby, Wigston, Fleckney, Kibworth, Great Glen, Market Harborough, and right across the constituency. We will also help election efforts in key marginal seats in the East Midlands region. Read more in this Leicester Mercury article.

We are looking forward to a positive campaign and we will be working hard to help elect a Labour government in 2015 led by Ed Miliband. Please get in touch to join our campaign – we would love to have your support!”

Read more: People in Harborough, Oadby and Wigston are fed up with failed Tory and Lib Dem policies